Shirin Gallery NY is pleased to present Sonatas and Partitas, a solo exhibition featuring the work of Mahmoud Hamadani, opening next Thursday, February 26. For the first time in New York, Hamadani will present works from all four series of drawings: Requiem, Traces, Endless Roads, and Odes. In his work, Hamadani contemplates basic dualities, such as light and shadow, order and chaos. The drawings also explore ideas of chance, accident, and repetition, through complex patterns and structures.

In Requiem, Hamadani draws rhythmic patterns – of grids, lines, or dots – each restrained by a simple structure. The drawings evoke the dynamics of complex systems, such as a city, or a beehive. Without a structure, a system is not sustainable, and without the freedom held within the structure, the system would not thrive. In this way, the work is a study of the relationship between order and chaos. “Look closely at each drawing and you will see a myriad of haphazard elements,” Hamadani explains. “Step back and a resolved serenity appears.”

The series of drawings entitled Endless Roads, is inspired by the poem, “The Untimely Traveler,” by Azadeh Farahmand:

I am the last child;
in search of the origins of my belatedness
forever searching
all corners of desire
and the endless roads
of wonder…

The process of making the drawings in Endless Roads is akin to a “search for that which cannot be found” (Rumi). The image that appears comes from that process, the merging of decisions and accidents. Hamadani describes the work as “beautiful accidents.”

Traces, another series of Hamadani’s recent work, is made through a process by which Hamadani blows ink in various directions across paper. The process itself is an investigation of chance and will. Hamadani explains that this body of work is inspired by Gu Cheng, a late Chinese modernist poet, and his poem “Forever Parted: Graveyard,” which goes as follows:

Now, on my heart’s page
there is no grid to guide my hand,
no character to trace,
only the moisture,
the ink blue dew
that has dripped from
the leaves.
To spread it I
can’t use a pen,
I can’t use a writing brush,
can only use my life’s
gentlest breath
to make a single line of
marks worth puzzling over.
Odes is a study of light and shadow, a common preoccupation of the moral being. Exploration of lightness and darkness is also a concept that often consumes artists. Hamadani considers this duality through an unforgiving process that provides no room for error (the opposite of the process that informed Endless Roads, which relied on accidents). The drawings in this series are composed of repeated, carefully drawn straight lines.
Mahmoud Hamadani earned a BA in mathematics from the State University of New York and a Master’s Degree in Public Administration from the Kennedy School of Government at Harvard University. Hamadani’s work is in the permanent collection at the British Museum, London. He has exhibited work at the New Museum of Contemporary Art, New York, as well as solo exhibitions at Karen McCready Fine Art, Michel Steinberg Fine Art, both NY; 7Bedford Row, London; and various group shows in New York. He is the recipient of the 2005 Pollock -Krasner Foundation Grant.
Mahmoud Hamadani "Sonatas and Partitas" Press Release 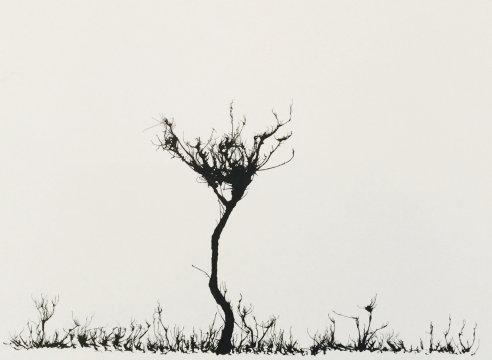