Farah Ossouli was one of the first artists to appropriate miniature paintings as an authentic, personal, and contemporary artistic expression to portray women’s lives.

Ossouli’s style evolved over three decades after the 1979 revolution and cultural isolation in Iran. Searching for a meaningful form of self-expression, she found it in the rich tradition and refined beauty of Persian paintings, architecture, and decorative arts. The impassive look of miniature figures was well suited to her universal themes of female and male protagonists.

Born in 1953 in Zanjan, Iran, she graduated from Tehran High School of Fine Arts (Honarestane Honarhaye Ziba) in 1971, and received her B.A. from the Department of Fine Arts (Daneshkadeye Honaryae Ziba), Tehran University, Iran in 1977. After 1979, it propelled Ossouli to pioneer and revitalize miniature paintings, which was one of the many genres she had studied in art school as a painter. She has also exhibited internationally in the Middle East, Europe, Africa, North America, and Asia.

From The Artists Eye:

Poetry reigns supreme in Persian culture and it has been essential to my life since I was a teenager. All my Wounded Virtue paintings have quotes from contemporary Iranian poems byAhmad Shamloo or Forough Farrokhzad even in compositions that reference famous images by Frida Kahlo, Francisco Goya, Peter Paul Rubens, Fra Angelico, Gianlorenzo Bernini, Reza Abassi, Jean-Léon Gérome, and Leonardo da Vinci. The hand-written poems lend rhythm and symbolic meaning to the visual syntheses that I present within elaborate borders and in the style of Persian Safavid miniatures.

The dialectic in Wounded Virtue contains Eastern and Western art, old and contemporary references to highlight the state of women in regions of conflict.

The overriding theme in my Wounded Virtue is that appearances may be deceptive of underlying realities as seen in packaged news and sanitized media. My intense insistence on intricacy and beauty serves to attract and draw the viewer in as a witness to disconcerting events that are either about to happen or have already happened. The contrast between surface beauty and serenity and lurking violence also exists in traditional miniatures, but in Wounded Virtue, they reflect the tension and conflict I feel about the gap between appearance and reality in the country, the region, and the world I live in. Internet and satellite images connect us instantaneously to many things around the world. It does not matter where we are located geographically. News and images travel quickly. We witness upsetting events live on TV or on the web. As a viewer, I experience a dialogue in my head in which I am alternatively judge, prosecutor, witness, and defendant. These images stay with me and become a source of pressure and anxiety. I process them through my personal filters into my work.

My style evolved over three decades as I sought my authentic self-expression. The figurative, decorative, and narrative style of Persian miniatures provided me with expressive potential and a rich tradition of refined beauty. Moreover, I found the impassive look of miniature figures suitable for my male and female protagonists engaged in universal themes. In Wounded Virtue, I selected famous artistic icons, because of some concept I liked, and then added my ideas and style of painting. I also made use of all three traditional characteristics of Persian miniatures — calligraphy, Tazhib (the decorative arts and book illuminations), and painting. In Wounded Virtue, however, they are infused with new features, such as contemporary Farsi poems, Tazhib designs with weapons, and new painted themes. 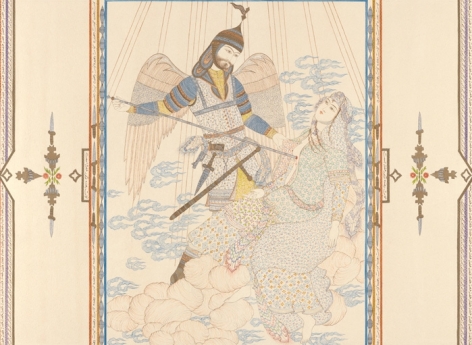 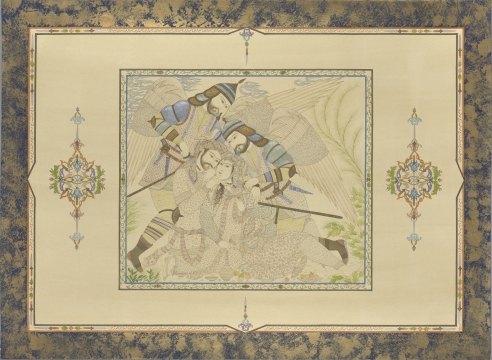 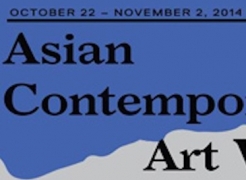