The Ardeshir Mohassess trust, founded in New York, is an educational, cultural, and
charity entity established to honor Mohassess’s works and execute his wishes. the
trust seeks to sustain, expand, and protect the artist’s legacy, and to safeguard and
promote his lifelong contributions to art. sales of artwork and contributions from
the public at large are put towards preserving the late artist’s collection and, as
per Mohassess’s wishes, offering financial aid to ailing and disabled artists.

The exhibition I Am Only a Reporter included drawings and collages
created by artist and satirist Ardeshir Mohassess during his years in New
York City (from 1976 until his death in 2008). Curated by Ava Ansari and
Molly Kleiman from the archive of the Ardeshir Mohassess Trust, and
presented by Shirin Partovi Tavakolian (Shirin Art Gallery) at Art Dubai
Modern, the exhibition contextualized and celebrated the artist’s later,
lesser-known work. As Mohassess recalled, “In New York I feel I am part

of a huge comic strip. This city’s influence brought to my work shapes,

lines, and geometric figures that appeared in my work for the first time.”
The detailed cross-hatchings characteristic of Mohassess’s earlier works
gave way to looser gestures, at times aggressively and jauntily splashing
the page. In the 1980s, as Mohassess began to struggle with Parkinson’s
disease, his lines grew messier, inkier, expressionistic. The three images
shown here are character sketches from this later, inky series, all dating
from the 1990s. A bearded figure in a dapper, feathered cap collapses
across the page—his body appears either lodged in or composed of
books. With accessories that invoke Don Quixote, the man’s relationship to
these books takes on new meaning: the knowledge and fantasy offered by
these tomes both constitute his form and cripple him. In Doctor and
Patient, Mohassess depicts a sensibly dressed man with a briefcase and a
second human head in tow. The two heads seem to grow from one
another. Or, is the larger skull masking the smaller face? This grotesque
composite figure speaks to an ambivalent view of the medical professions,
the reliance of both doctor and patient on one another, and the anxiety of
such a relationship. In Looking for What, four men balance on one
another—a comic, kinetic totem pole. They are each searching for
something, and yet their inquiry is predicated on maintaining their
collective balance. This interdependence offers each man a different
perspective, but also a precarious place. The title conspicuously lacks
punctuation: Is Mohassess (and thus the viewer) meant to question the
object of these men’s search—what are they looking for? Or is the title
declarative—”Looking for what.”—And thus suggesting that these men are
seeking an unknown? 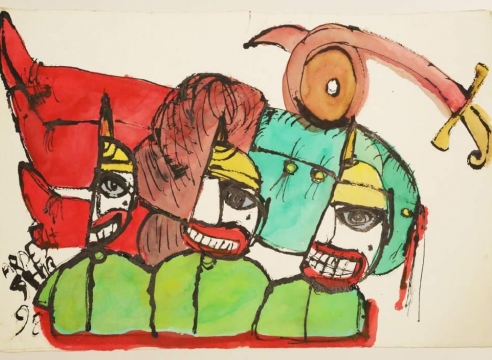