When featuring his work, Rolling Stone magazine wrote, “He recreated Warhol’s populist glamour in an entirely different language.” Other publications have featured Behnoud’s works, including BBC, Elle Décor, and Vanity Fair, which called him one of the “most influential Persian-American Artist that are bringing Iran to U.S.A.”

Behnoud has shown internationally, with exhibitions at Asia Society Museum, New York; Nicolas Flamel Gallery, Paris; Mah Art Gallery, Tehran; and Courtyard Gallery, Dubai, among many others. His clothing line, NIMANY, founded in 2004, has sold in twenty-two countries. He is now based in New York.

On his studio art practice, Behnoud writes, “I have kept a secret during these years when NIMANY Clothing line was growing. A personal secret that allow me to think without the boundaries of business world created by the expansion of NIMANY. The Secret was an art studio in the industrial section of Brooklyn. A secluded location where I could express myself freely and recreate that very first organic artistic experience over and over again. I worked there on weekends and nights and created art pieces on canvas and paper, using acrylic paints, silk screens and other painting methods. I rescued my sanity and mind by building my own refuge. My very personal safe-house.”

Art collector Maneli Keykavoussi has described Behnoud’s studio art in relation to his endeavors in fashion, saying, “Beautiful hues of bright ceries red, sky blue and orange hit you in Nima’s works, with streaming colors into calligraphic abstract forms. Nima is an amazing colorist, bringing motifs of his Persian culture and calligraphy into a new livelihood, imbuing them with the emotional weight of Persian poetry that they illustrate. As the son of Iran’s most influential journalist Masoud Behnoud, Nima grew up in an intellectual circle in post revolution Iran, an oppressed society that left few outlets for youthful energy and expression. Yet the repression conversely functioned as the strongest form of stimulus for creativity among the youth. Nima practiced painting, drawing and silk screening in his teenage years: a practice that later on became the basis for creation of his clothing line NIMANY… Both in his wearable art, the dimension of his practice oscillating between fashion and art and in his studio art, the colors are bright and sharp. Despite the melancholic meaning of the poetry that may be legible or poignant story of the newspaper print, the sensation evoked is pure pleasure. His work is inspired by Warhol’s aspiration to be Matisse, creating dreamy palettes of a master colorist and adopting his machine like production. He recreated Warhol’s populist glamour in an entirely different language, he made pop art that is entirely Iranian and of his own. His art puts a sheen on the heavy meaning that underlies the writings of the calligraphic forms or other prints that he uses, instead he makes it a representation of the glamour and éclat that runs through the environment of Iran’s youth that has been created despite all the suppression, imposition of blackness, forbidding colors and celebrating death as a center point of the revolutionary culture.” 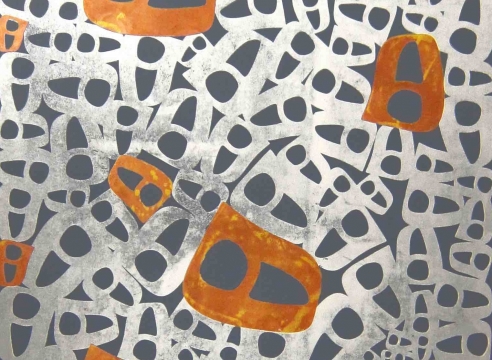